The Missouri Poet Laureate enriches Missourians’ lives throughout the state by fostering the reading and writing of poetry, through public appearances, readings, workshops, and digital and social media. “As Poet Laureate,” Ms. Wagner says, “I’d like to find ways to reach out to people who don’t usually read poetry or even think they like it.”

Ms. Wagner has published nine collections of her poetry, most recently “The Immigrants’ New Camera” (2018). Other books include “Salvatore’s Daughter,” “Light Subtracts Itself,” “Dioramas,” “Pouf,” “The Silence of Red Glass,” and “Red Silk,” which won the 2000 Thorpe Menn Literary Excellence Award. Her poems have also appeared in dozens of magazines and anthologies.

Ms. Wagner has co-edited several poetry anthologies and the New Letters Review of Books. She has co-edited I-70 Review magazine since 2010.

Her poetry “is accessible in the best sense of the world—straightforward, lucid, concrete,” says William Trowbridge, Missouri Poet Laureate 2012-16. Her poems, says Arizona poet and author Gary Gildner, bring readers “stunning moments with children, with family and feelings, the stuff of this world unfolding as natural and necessary as a flower—the loves and losses, the albums in the attic, the meals of ravioli—stories simple and splendid.”

In 2020, Ms. Wagner was named the Individual Artist honoree for our Missouri Arts Awards, the state’s highest honor in the arts. 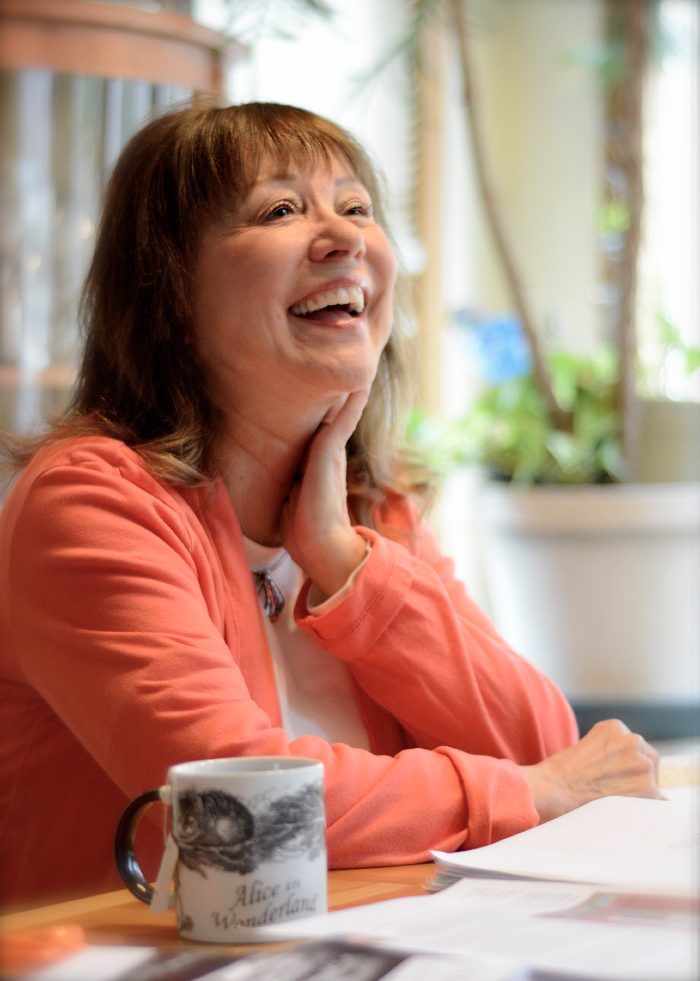 Drinking tea with a fictional friend. “Lewis Carroll’s ‘Alice in Wonderland’ and ‘Through the Looking Glass’ have always been among my favorite books. I love their layered meanings, their parody of logic, and their absurdity.” | photo, Andrea Brookhart

“All of my books have poems about family in them,” says Ms. Wagner.

“My mother wrote poems and my father recited them. So I started writing them with my mother. Then one day, we wrote one together—all three of us. It was a poem about country living. And that just sort of set the path. I just kept on writing.”

Ms. Wagner is the granddaughter of four Italian immigrants. That heritage often inspires her work.

“Maryfrances Wagner’s images are seasoned with the immediacy of Kansas City’s Little Italy, the family kitchen, the table with its stories, tender, painful, and humorous,” said Kansas poet Al Ortolani about “The Immigrants’ New Camera.” “The poet’s narratives simmer in the richness of the Italian-American experience. Yet, as the best poems do, Wagner’s poetry connects the reader to the universal, but with a hint of fresh basil and chopped tomatoes.” 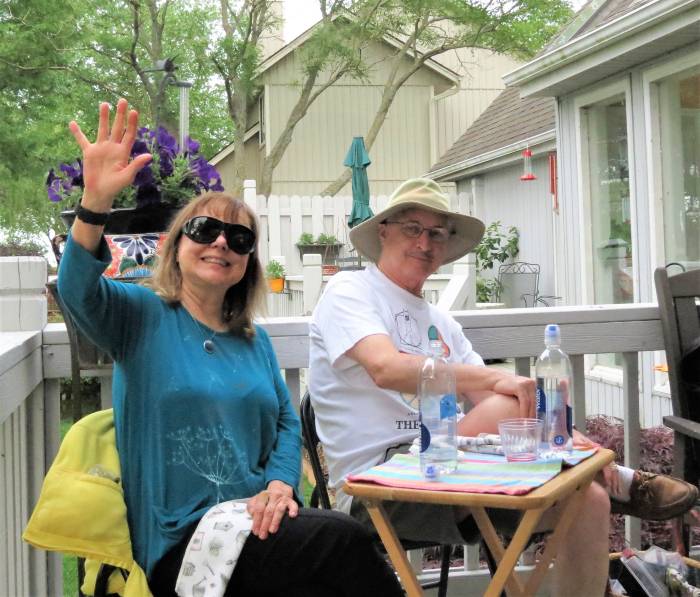 Bringing poetry off the pages

For decades, as a teacher, mentor, and arts volunteer, Ms. Wagner has been encouraging and enabling people to experience poetry and to write it themselves.

She has helped sponsor or coordinate scores of cultural events, from the KC Fringe Festival to Crown Center’s Art Fest. She is passionate about connecting the arts and has set up programs that mix poetry with music, dance, and visual arts.

She also loves to unite poetry with science and nature, such as her workshops at Powell Gardens that combine nature walks with poetry and breathing exercises with haiku. “I have probably written almost as many poems about nature as I have about family,” she says.

Ms. Wagner has volunteered with The Writers Place, Kansas City’s literary community center, from its opening in 1992. She has served in many ways including as a board member and as co-president, and is currently vice president and programming chair. She has also been a board member of the American Poet Series and secretary of Kansas City Creates.

She has done readings and programs for organizations such as Kiwanis, Rotary Club, Lions Club, Turning Point Cancer Center, and many more. She has taught workshops around the state at all levels, from 3rd-graders to college students to older adults, including many workshops for at-risk and under-served students.

Ms. Wagner taught English and creative writing at Raytown High School and the University of Missouri–Kansas City (UMKC) for 30 years, winning local and state recognition for excellence in teaching. She and her husband, Greg Field, established and continue to fund the Crystal Field Scholarship for creative writing students at UMKC. 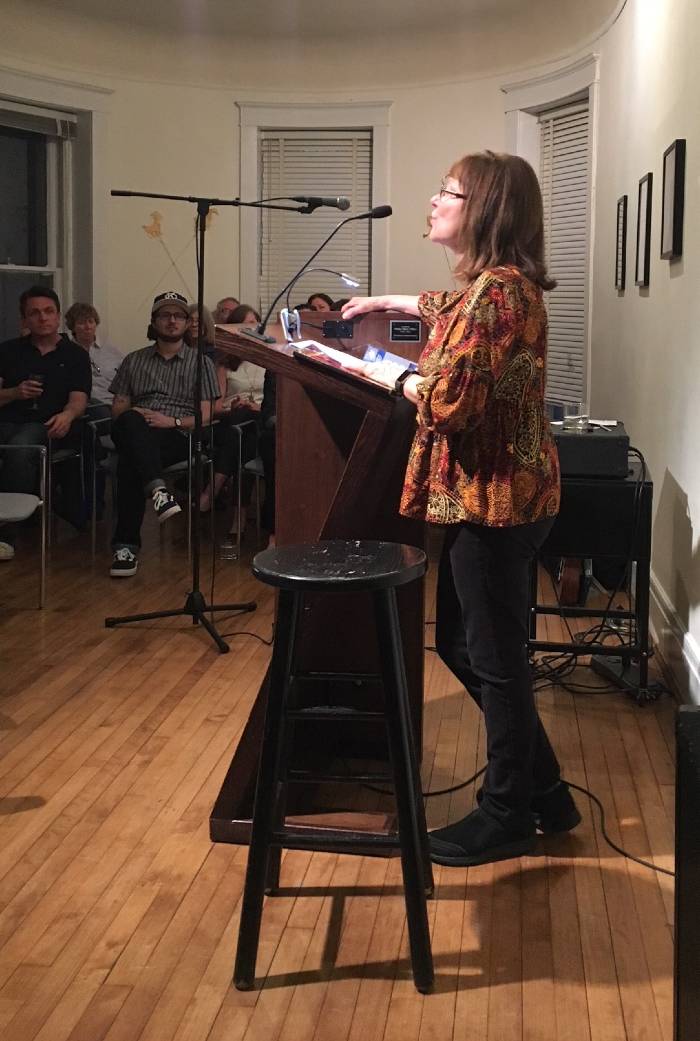 Maryfrances Wagner’s website includes a sampling of her poems and links to the online publication of many more. Here is a taste.

When I Am In My Kitchen

Under my palms, dough rises on Nonna’s breadboard.
Knives, dependable as good clocks, ease through
fish and avocado, chop onions or eggs into dice.

I mince and mash, sauté and stew,
sift and fold, wield spatulas and spoons.
With metal whips, I coax froth and foam.

I slip basil into marriages of garlic and oil,
know dash from smidgeon or pinch.
I grate and grind, zing zest, and flip.

I’m not afraid of cardamom and coriander, fennel
and bay. I tuck dill into hummus, know the ménage
of rosemary, safe and savory; cinnamon, nutmeg and clove.

I remember mother’s meringues, the melt
of her teacakes, the meld of her stews—
and Nonna and her pots heavy and true,

her palm measuring salt, its immutable truth,
its briny clip in the mouth, its promise to preserve. 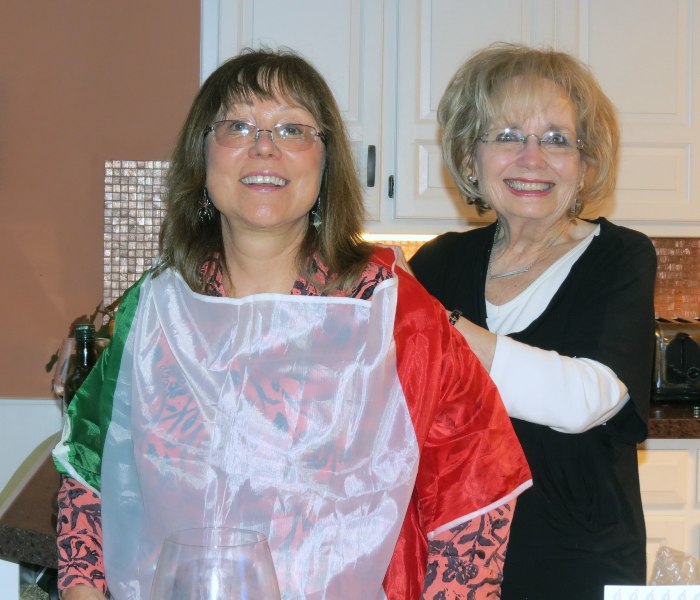 In her kitchen with Jo McDougall, Arkansas Poet Laureate 2018-present. The apron inspired by the Italian flag came home from a trip with family and friends to Italy.

It is customary for Missouri’s Poets Laureates to create a poem inspired by the state. Maryfrances Wagner gave her “Missouri” its world premiere by performing it at the Statehood Day ceremony on the steps of the Capitol on August 10, 2021, the 200th anniversary of Missouri’s entrance into the Union as the 24th state. The Little Blue Trace is a trail along the Little Blue River that runs between Grandview and Sibley near Independence, where Maryfrances Wagner lives. The Little Blue River empties into the Missouri River.

Little Blue Trace, still as glass all winter,
breaks its silence to eel around its curves.

Sunlight spangles the surface like a flash
of minnows. Mayapples open their umbrellas

and shade trillium. The hunt is on for morels
hidden under elms. A bluebird skims below a heron

flapping to its rookery. The chorus frogs creee
and trill. I stretch my arms to the cave state,

solid beneath my feet. Summer brings
the thump of June bugs on lights, honeybees,

and the hornworm emerges as a sphinx moth.
By July we wipe sweat from our necks and bite

into sweet corn and catfish, the plumpest Big Boys,
and juicy Red Havens. Pawpaws and persimmons

slip from their trees in thuds until katydids
cease their churning, and chill scatters us

like the red and yellow leaves backlit
in the last October light. Frost returns to scrim

impressions. By morning, the reverse braille
of bird tracks will leave us runic messages. 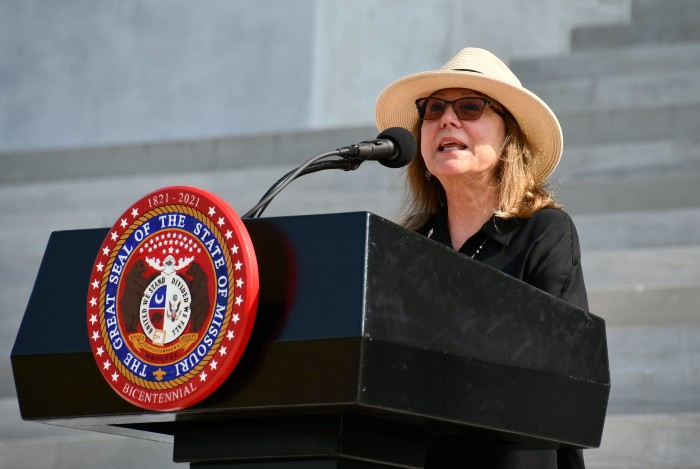 Maryfrances Wagner performing her “Missouri” at the Capitol on Statehood Day, August 10, 2021 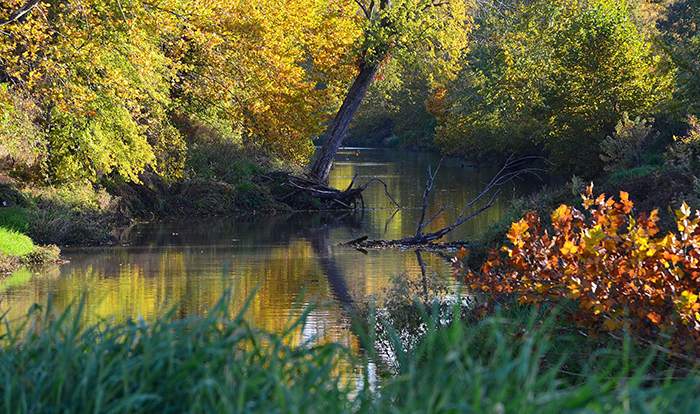 The Missouri Arts Council facilitates the Missouri Poet Laureate program on behalf of the Office of the Governor. The program began in 2008. Maryfrances Wagner succeeds Karen Craigo of Springfield, Poet Laureate 2019-21. 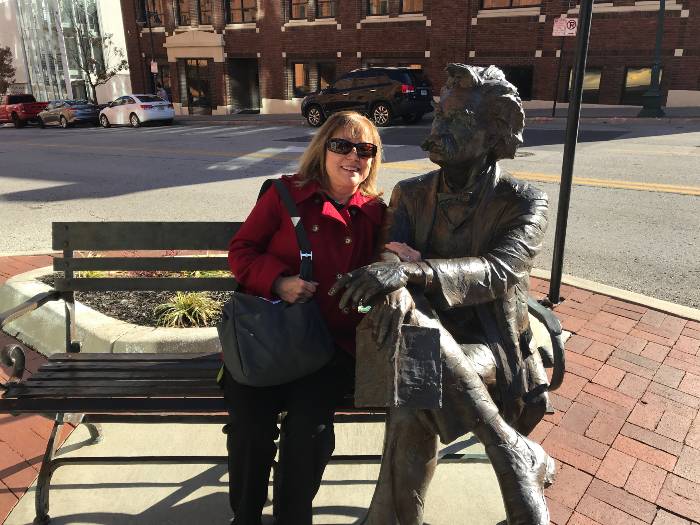